How to read a ukulele chord?

There are many ways to transcribe a chord in written music

A chord diagram is a schematic way to transcribe a chord.

Here is an example of what a classic chord diagram looks like:

As you can see, a chord diagram consists of 4-6 horizontal lines (it can vary depending on the position of the notes needed in order to play the chord on the fretboard), and 4 vertical lines.
Vertical lines represent the four strings of the ukulele (From left to right: G-string, C-string, E-string, A-string), and horizontal lines are the frets. Top line is the nut (fret #0), except if there's a number on the right side of the diagram (then the starting fret depends on this number).

The dots show where to put your fingers to play the chord; each dot corresponds to a note. Sometimes the numbers also indicate which finger to use (on ukulele-chords.com, it's written below the diagram): 1 (index), 2 (medium finger), 3 (ring finger) and 4 (little finger).

Other symbols can also be found just below the chord name: a circle ("O") for a string played open, and a cross ("X") when a string should not be played.

You can also find chords in tabs, or transcribe them in the form of a tablature. In this case, you'll find the figures mentioned above, but the strings are no longer presented vertically but horizontally (A-string, E-string, C-string, G-string from top to bottom). A chord is made of a vertical series of numbers, like this:

The third and last way to transcribe a uke chord is as a series of 4 numbers (one per note, with "0"'s for open strings, and "x"'s when you must not play a string). As for a diagram, we transcribe the chord from left to right (or bottom to top, if you compare to a tab).

Important things to remember about chords 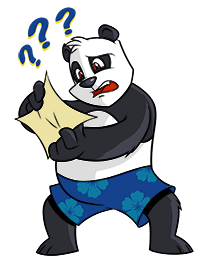